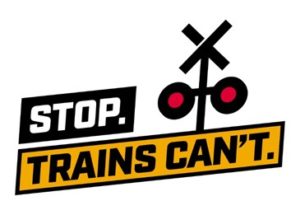 The U.S. Department of Transportation’s National Highway Traffic Safety Administration (NHTSA), the Federal Railroad Administration (FRA) and the Federal Transit Administration (FTA) are teaming up once again for the Stop. Trains Can’t. safety campaign to remind drivers to stop at railroad crossings. The campaign, which begins March 22, 2021 aims to help reduce collisions, deaths, and injuries at railroad crossings, which occur approximately every four hours in the United States. Given a train’s size, weight, and mass, it takes a train a long time to stop, even in an emergency. It is for this reason that, by law, trains always have the right of way and, ultimately, it is the driver’s responsibility to avoid a collision. Read on for more safety tips and facts.

Trains Always Have the Right of Way

Use Caution at Every Railroad Crossing